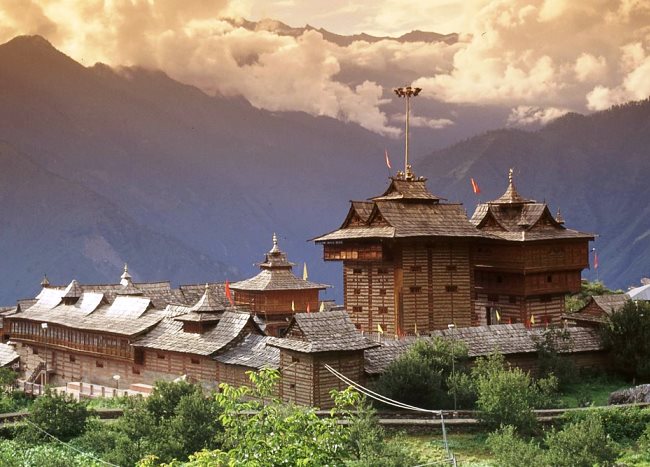 The entire Bhimkali Temple architecture is based on gravestones that can’t be found anywhere else in the erstwhile hill states. Here is all that you should know about this sacred place:

Bhimakali temple history demonstrates an interesting story of the Bhimkali temple Mandi Himachal Pradesh. During the earthquake of 1905, it had got a bit lurch. However, with another following upheaval, after the earthquake, the temple straightened on its own.

It has been believed that there is a secret tunnel which was earlier used for a village named Ranwin and the new one is constructed by the side of the old Bhimkali Temple.

Besides these, there are some more myths about this Mandir. As per one legend, this temple is a manifestation of the goddess Daksha-Yojna incident. At that time, the ear of Sati fell at this place, so it is worshipped as Pitha-Sthan. Presently, in the form of a virgin, the icon of this eternal goddess is consecrated in the top portion of the new building.

Bhimkali Temple Timing and Rules of the temple

In a day, four Aarti ’s are performed at regular intervals at the Bhimkali shrine. The first Aarti has taken it down around 6.00 am in summer and 7.30 am in the evening. The second one is done after two hours of the first one. The third one is performed in the noon by offering the local food to the goddess. The fourth Aarti is Shayna, at this time Shloks from the religious text is recited.

Udhyapan jag is a religious festival which is celebrated here, but at the intervals of thousand years or more. The last jag was organized in the year 1904 which took place after the 280 years.

How to reach the Temple?

There is no proper rail service to this place, but one can catch a cab or a bus to reach there, as Sarahan is 180 km from Shimla and approximate 550 km from Delhi. One can hire a jeep and taxi or a cab. Sarahan is Six hours from Shimla. There are also a number of buses available to reach this place. The route is on National Highway-22.

This ancient Bhimakali Temple Sarahan has been constructed about 800 years ago, since then its reputation and prevalence are on the top. Plan your visit to this unique temple Bhimkali and get a more personal approach to know about this temple.