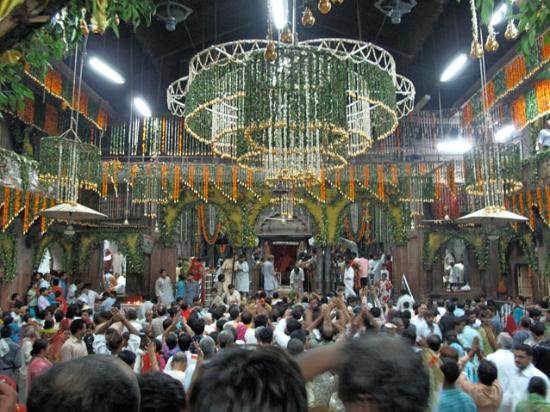 The Banke Bihari Mandir is located in the holy city of Vrindavan in the Mathura District of Uttar Pradesh. This temple is dedicated to Lord Krishna.

Banke Bihari Temple is the prime attraction, and a highly revered shrine of Vrindavan. Lord Banke Bihari is also known as “ThakurJi” the owner of the whole words and supreme power.

The Mandir is built in 1864 by Swami Haridas (Guru of Famous Tansen). The elongate list of Banke Bihari temple miracles pulls devotees to worship here. The oldest and the most famous one in Banke Bihari Mandir history is based on the inception of this temple. This is believed that once at the request of some adherents, Swami Haridas sang a pious verse in Nidhivan, Vrindavan. After singing that verse, the angelic couple of “Radha Krishna” appeared in front of him & merged into one, and then the idol of Banke Bihari appeared there. Now the same idol can be seen in the temple.

The services offered to deity are regarded as the “Sewa” of the deity. At the time, Swami Haridas tendered Sewa of Bihariji to Goswami Jagannath. Ever since the Sewa of Bihari Ji is performed by the heir of Goswami. Also, Bihariji is worshipped in a unique style. The services are divided into three parts, the first one is Shringar, second is Rajbhog and the last one is Shayan.

In the First part, the lord is bathed, dressed and decorated with jewelry. In the second part, Thakurji is offered Rajbhog, encasing delicious food. The third Sewa is known as “Shayan” in which Banke Bihari is made to sleep. Unlike other temples of the Hindus, this Mandir doesn’t have the ritual of morning prayer, it is considered that the lord gets up late in the morning so even no bells are rung.

Another attraction of this temple is that during the months of “Sawan”, the temple is decorated with flowers and lights. This decoration is enunciated as “Bangla” that means bungalow of the lord. The festival “Janamashtmi” is celebrated here with full enthusiasm. Even in the month of “Phagun” and at the time of Holi Fest, thousands of devotees, especially visit the temple to celebrate this festival with Thakur Ji.

The temple does not span any bell. Banke Bihari mystery or one can say it is a myth of this temple, according to which, anyone, during the Banke Bihari Mandir Darshan, stares long enough into the eyes of Shri Bankey Bihaiji, the person would lose his/her self-consciousness.

Banke Bihari Temple Darshan is allowed only at 12.00 in the night

One can visit in any season. In summer Mandir is open at:

How to reach the Banke Bihari Mandir

Here are the ways:

Banke Bihari Temple is truly an apotheosis of devotion and dedication, and of course, a must-visit.