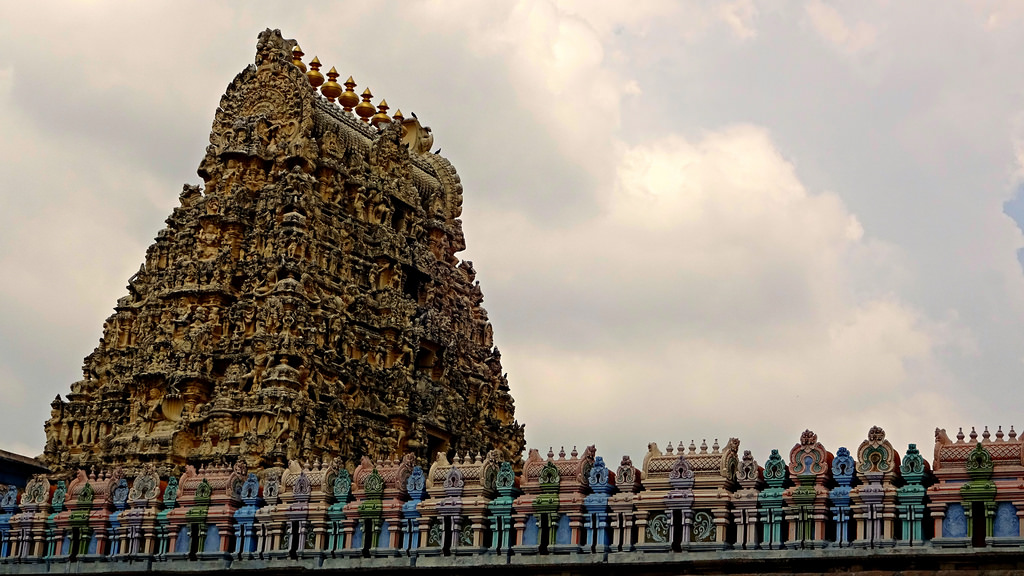 Ekambareswarar Temple is the most prevalent Shiva temple situated in one of the most sacred cities of Hindus, Kanchipuram, Tamil Nadu. Lord Shiva has demonstrated himself as Prithvi (Earth) Lingam. It is the most ancient one and its existence is believed to have since 600 AD.

Ekambareswarar Temple history is associated with the strict penance of Goddess Parvati to marry Lord Shiva. The Goddess was sent to earth as a punishment of closing Lord Shiva’s eyes, which halt Shiva’s, work in creating and protecting the universe. For infinite years, she stood on a single leg and carried on her self-mortification under a mango tree, on the Vegavathi Riverbank. Shiva created tremendous tough tests to check the penance of the Goddess. He set the place to fire; navigated Ganga to interrupt her penance, but all went in vain. And, after getting impressed by her pure feelings and hard penance, Lord Shiva finally accepted her wish and got married to Goddess Kamakshi. Ekambareswarar Temple is situated exactly at that place.

As per second Ekambareswarar Temple story, when Goddess Parvati built lingam by using sand, then Vegavathi River threatened to engulf the lingam. Then Parvati without wasting even a second embraced the lingam and put her life on a stake to save that. This impressed Lord Shiva who descended to earth to marry her.

The temple’s tower named a Raja Gopuram is the tallest one. It’s around 59m tall. It’s architecture perfectly epitomes the excellent artistic skills of Pallavas, Vijayanagars and Cholas era. The thousands of pillars, 108 Lingams, inner walls adornment and carvings of the whole shrine are worthy to behold. In the temple complex, there is Thiru Nilaaththgingal Thundatha established which is the name of Vishnu shrine.

Ekambareswarar Temple’s holy mango tree of 3500 years old, is enunciated as the most auspicious one. Its four branches exclusively represent four Vedas, Sama Veda, Rig Veda, Atharva Veda, Yajur Veda. Surprisingly, the fruits on all these branches have different taste. Presently, closed glass walls have been built to shield this tree.

This temple is famous for Ashtothra Lingas (108). In the whole shrine, people lit 108 lamps. It is believed that one who worships here gets freedom from the circle of birth and death.  The Spatika Linga is established on the west side of Lord Ekambareswara shrine and it is believed that the devotee turns into a completely pious personality without having any flaws left in the body after worship here.

All the days Ekambareswarar Temple timings remain the same.

How to reach Ekambareswarar temple Kanchipuram?

You can reach there by resorting to any of these routes:

The bus stand is just 2km away from the temple in Kanchipuram city.

The railway station is in Kanchipuram city and just 1km away from the temple.

The nearest airport is Chennai International Airport which is 8km away.

This temple represents, Earth and is considered as the major one among all PanchaBootha Sthalas. Other temples representing natural elements are Thiruvannamalai Temple (Fire), Thiruvanaikaval Temple (Water), Kalahasti Temple (Wind), and Chidambaram Temple (Sky).