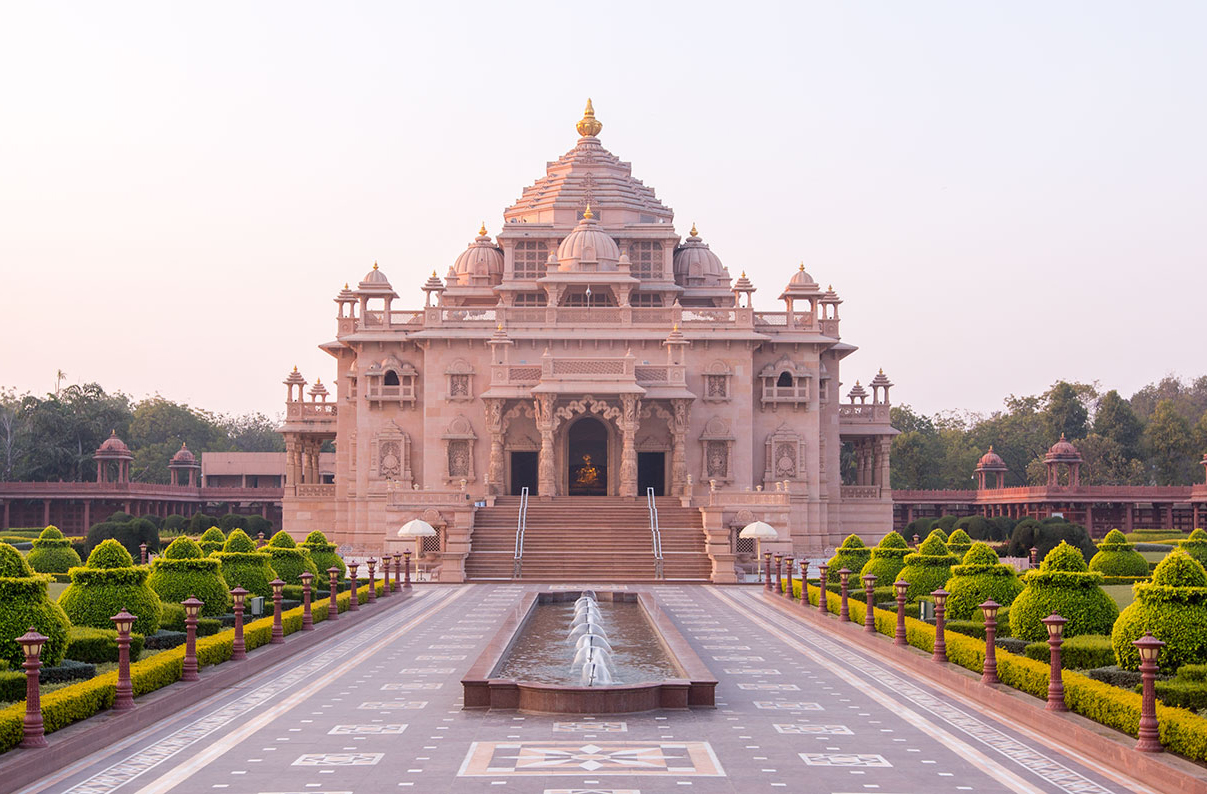 Akshardham Mandir, New Delhi, is well known for its exceptional spiritual and cultural features that standouts it from all other temples. This temple is also prevalent as Swaminarayan Akshardham complex. Akshardham means God’s imperishable temple. The architecture, supreme spiritual values, and rich culture made this complex, the most visited place ever.

Akshardham Temple history is not long years back. Bochasanwasi Shri Akshar Purushottam Swaminarayan Sanstha head, Pramukh Swamiji Maharaj has evolved the idea to construct this temple. So, it is developed with the inspiration of Swamiji Maharaj. In its construction, about 7000 artisans have worked along with hard work of 3000 volunteers.

In the year 1968, the concept of this temple was idealized by Yogiji Maharaj, who was BAPS Swaminarayan Sansthan’s head. After that in 1982 (Yogiji Maharaj attained Samadhi), his successor, Pramukh Swamiji Maharaj initiated that plan. As Yogiji wanted to construct it on Yamuna River’s banks, so, Swamiji wanted the same to happen.

After 18 years, their dream turned into reality when 60 acres land was sanctioned by Delhi Development Authority and 30 acres land by the Uttar Pradesh Government for this project.

On November 8, 2000, its construction gets started under the supervision of eight sadhus (celibates). The construction process continued for approximately five years and with the devotional hard work of devotees and artisans, it took such a less time. Finally, Dr. A.P.J. Abdul Kalam inaugurated this temple on November 6, 2005.

Akshardham Mandir Noida, Delhi NCR, features amazing architectural beauty that represents Indian culture in a better way. It has been constructed by taking into account, Maharishi Vastu Architectural standards and Shilpa Shastras. Italian Carrara marble and Rajasthani pink sandstone have been used for its construction.

Akshardham Mandir subsumes around 20000 sculptures of devotees, sadhus & acharyas, 9 domes, and 234 beautifully carved pillars. There Gajendra Pith has also been featured representing Indian history and Hindu culture. There are 148 life-sized elephants having a weight of about 3000 tons.

The statue of Swaminarayan has been situated 11-foot high, under the central dome of the temple. This temple is dedicated to Swaminarayan. The lineage Gurus images surround this statue. These images are either in service posture or in devotional posture.

Each of these sculptures has been made by using five metals (Paanch Dhaatu), which hold an utmost importance in Hindu tradition. Besides these, there are statues of Radha Krishna, Lakshmi Narayan, Shiv Parvati, and Sita Ram.
Akshardham Temple has bagged one Guinness World Record as well for massive construction contributing the maximum to Indian culture and Hinduism.

How to reach Akshardham Mandir?

As this temple is situated in Delhi, so, there’s no problem you could face to reach here. From the railway station (Old Delhi), it is 45 minutes away. From the airport, it takes around 1 hour 30 minutes to reach and from New Delhi railway station, it takes just 40 minutes to reach there. You can even reach by Metro. So, you can visit this temple by picking any mode of transportation.

Plan your visit to this monument which is a perfect blend of modern and authentic techniques. Believe me, it will leave a lasting imprint on your life.